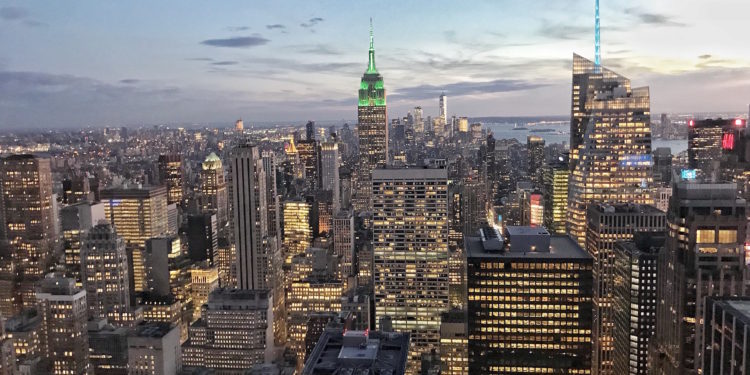 The world’s most economically powerful & influential city deserves a visit

New York is a brilliant yet overwhelming city with plenty of historic monuments, magnificent buildings, and countless dazzling skyscrapers.

This urban jungle offers everything between Central Park’s leafy paths to Times Square’s neon streets. A global center of entertainment, fashion, culinary arts, media, and finance, this city has something on offer for every traveler.

How to get to New York from Dubai

How to apply for the U.S. Tourism Visa

The U.S. visa procedure can seem to be a daunting task at first, but if you research and prepare well in advance, it’s one of the most straight-forward visa applications.

I am working on a detailed blog post on How to apply for the U.S. Tourism Visa from UAE with step-to-step directions.

From a tourist’s perspective, Midtown (between 5th, 6th, 7th, and 8th Avenue) is one of the best neighborhoods to be in.

My recommendation: The hotel that I stayed in – Park Central Hotel
Location: 870 Seventh Avenue at 56th Street, New York City, NY 10019
Nights stayed: 10
Avg. price per night for 3 guests: USD 400 (AED 1500)
Stars: ****
What I liked about this hotel: location, spacious rooms
What I did not like about this hotel: slow service
Booked via booking.com

The best way to get from JFK to any location in Manhattan is by using New York City’s yellow cabs that are licensed by the government.

Cost: flat fare of $52 + surcharges + tips, bringing the average cost to $70 (AED 250)
Taxi ride duration: 1 hour
Taxi stand location: The taxi line is at the exit after baggage claim
Note: Each trolley at JFK costs $6 (AED 25) to rent, but it’s not worth it because the distance between baggage claim and the taxi stand is barely a 2-minute walk.

Entrance to the subway

The best way to navigate New York is by:

How to get a prepaid sim card in New York

Don’t buy your sim from the airport. If you desperately need data, purchase a 24-hour package with Du’s Easy Roaming service for AED 35 per day. Once you get to the city, go to the network provider’s showroom and buy your sim card directly from them.

The best places to see in New York

1. Take a walk at Times Square

Times Square is the cinematic epicenter of NYC tourism, including the best Broadway shows and flagship stores of popular American brands. It’s the city’s busiest and most iconic attraction.
Tips: if you get photo opportunities with quirky characters or CDs distributed to you, be aware that they will ask you to pay up eventually! Also, avoid having a meal at Times Square – they’re all tourist traps. Don’t buy souvenirs here either – they’re a ripoff.

2. Have a picnic at one of New York’s beautiful parks

One of the most filmed locations in the world is Central Park in New York. There’s so much to do here that you can easily spend hours and not get bored! Attractions include cycling, boating, carousels, and restaurants.
Places to see in Central Park: Bow Bridge, Bethesda Fountain
My favorite park in New York: Bryant Park

New York is home to various flagship department stores such as Bloomingdale’s, Saks Fifth Avenue, and Barneys. These stores are on every shopaholic’s New York itinerary! However, if you are looking for great bargains, then you might want to…

4. Make a trip to an outlet store

For a never-ending shopping adventure, head to one of the outlet malls for some serious spending opportunities. America is known for super-sized shopping compounds offering a large collection of outlet stores where you can get some unbelievably good deals.

5. Pay homage to the event that changed the world forever – 9/11

One of the most tragic events in New York’s history is the September 11 attacks. The 9/11 Tribute Museum provides an educational experience of what it was like to work and live around the original World Trade Center prior to the attack, as well as a record of the exhibits and experiences of many survivors of this unfortunate incident.

Cost: $24 per adult
Tip: Ground Zero, where the World Trade Center stood, is a few minutes away from the 9/11 Tribute Museum

Grand Central Terminal’s grandeur is what makes it different from all the subway stations in New York. It’s not surprising that it has been used as a backdrop for various feature films and TV shows through the years.
Did you know? Serena van der Woodsen from Gossip Girl was first spotted at Grand Central Terminal in the pilot episode!

The City from a different perspective

The best way to see the soaring skyscrapers in New York isn’t simply looking at them from the ground, but enjoying them from the top. Be it at an observatory or a rooftop bar, this experience is an absolute must for first-time visitors.

8. Have a meal at a local street fair

Some of the best eateries in New York are found in local street fairs and alfresco bazaars. It’s a great activity to include in your itinerary since it’s free and fun!
Recommended fairs: Mad. Sq. Eats, Smorgasburg, Chelsea Market
Tip: Make sure to check local publications such as Time Out New York to stay updated on the latest fairs happening in the city

9. Spend a day getting lost in the world’s best art museums and galleries

The Starry Night by Vincent van Gogh, currently at the MoMa in New York

New York’s prominent art scene is bustling with names such as Guggenheim, MoMa, and The Met, to mention a few. These museums will give you access to an unimaginable collection of artwork that you cannot find anywhere else in the world.
Tip: Many of these museums offer free entry on certain days – check their websites before you plan your trip

10. Appreciate what the French gifted the Americans in 1886 – The Statue of Liberty

New York’s most familiar landmark, The Statue of Liberty, is only accessible by a ferry that departs from Battery Park – the lower tip of Manhattan. Opt for the Statue of Liberty cruise for 1 hour if you want to see the monument up close, or purchase tickets in advance to visit the pedestal or the crown – although these experiences will take longer than the cruise.

One of the most mesmerizing moments during your New York trip will be observing the sun set in the city that never sleeps. My favorite spot was Pebble Beach in Brooklyn, where you can see the entire Manhattan change color in a span of minutes.

Arguably the most prestigious avenue in Manhattan is Fifth Ave. This is where the most luxurious apartments and hotels in New York are located, as well as iconic boutiques such as Tiffany & Co where Audrey Hepburn once came for breakfast!
Did you know? The current US President Donald Trump resides in Trump Tower on 721 Fifth Avenue

Is there anything else that I should include in this guide? Let me know in the comments section!

My Invisalign journey! Results so far + ...

Hello, my name is Lavina and I live each day like it’s my birthday!

I visit the latest restaurants, hotels, spas, fitness centers, beauty salons, and shopping malls in the UAE to uncover the best that this country has on offer. I also travel whenever I can – exploring new places is my passion!